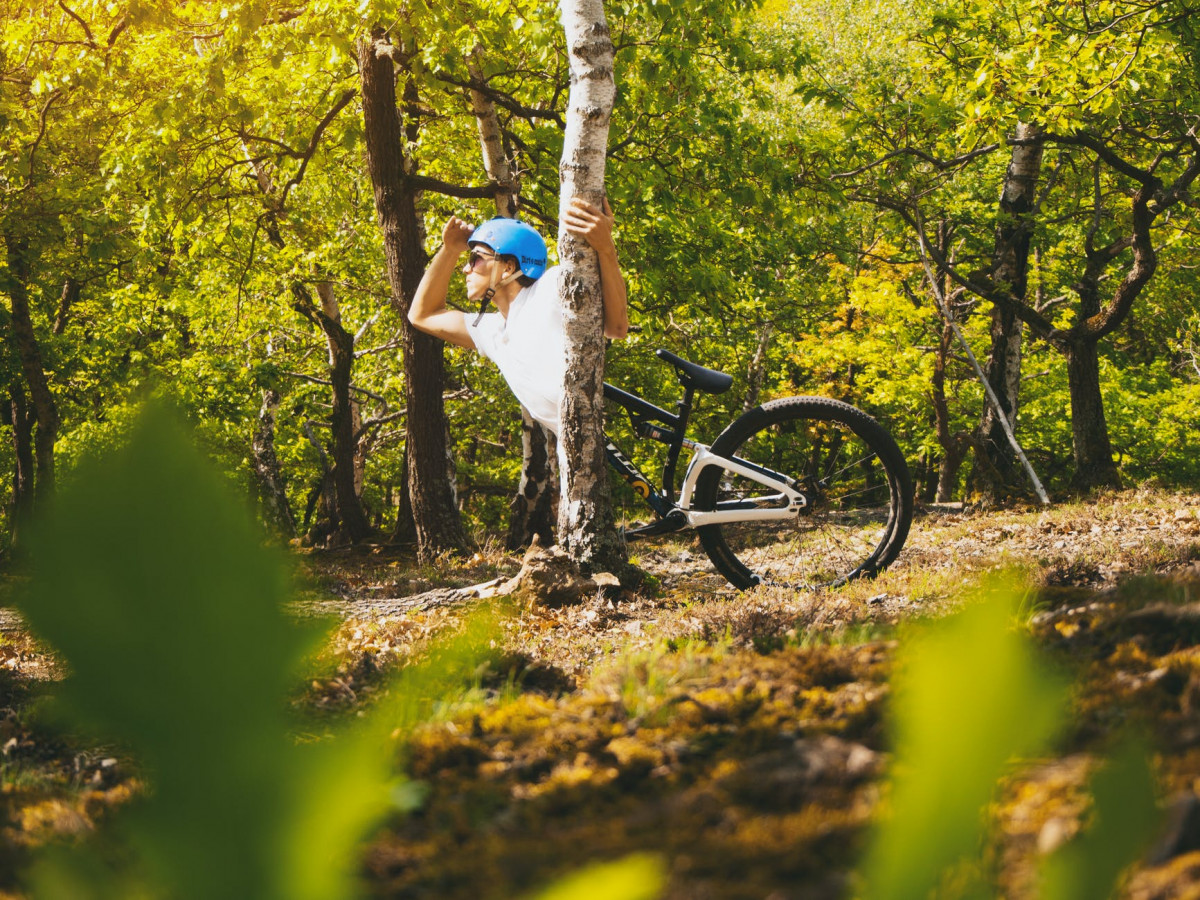 We came, we rode, we smiled.

When we made our final trip of the year to Ray’s Indoor Mountain Bike Park in Cleveland, there was a lot of wind, chilly temps, and rain, and it felt like it was somehow fitting that all of these things happened. At the end of the day, Ray Petro made the decision to construct a playground in the style of North Shore in an abandoned warehouse in West Cleveland, Ohio because of the harsh winter environment in that area. The playground measures 80,000 square feet.

I have been in charge of planning bus excursions from St. Catharines, which is located in Ontario, all the way down to this one-of-a-kind riding centre, which is situated around four hours away. The practicalities of organising this kind of journey are rather ridiculous, but in the end, forty or fifty people will ride a full-size coach bus down Interstate 90 through New York and Pennsylvania on their way to Ohio.

Because I have a 24-foot truck that’s packed with tens of thousands of dollars’ worth of bikes, I’ve never been able to enjoy the party atmosphere that the bus provides. However, since I’m the one who’s organising the trip, I only trust myself to be responsible for everyone’s rides on the way to and from Cleveland.

When we go to the amusement park, we ride for at least six hours before we travel back home, and by the time we’re done, everyone is utterly worn out but has a grin that extends from ear to ear as a result of the experience.

So who is Ray and what’s his park all about?

Ray Petro, a 38-year-old company entrepreneur in the construction industry, gave up drinking, doing drugs, and going out to parties eight years ago in favour of developing a new addiction: mountain biking.

“During that first summer, I was completely consumed by it. I was the most loyal client at the neighbourhood bike store. I felt like a little child at a toy shop, except that I now had enough money to purchase everything I wanted. Then autumn arrives, and I completely lose my mind. “As the weather went for the worse, I found myself falling into this malaise,” he said.

The first thing that needed to be done was to find a place, and when a real estate agent showed him the brick building that is now home to Ray’s, it was like falling in love at first sight. The structure was an ideal choice for fulfilling all of his requirements in every way.

Because the building has enormous glass windows on the top, it does not need artificial lighting throughout the day because natural light can easily enter it, giving the whole area an atmosphere similar to that of being outside. There are hundreds of pine trees painted on the walls, artificial trees all over the three courses, and massive amounts of rocks, logs, and wood making up the various stunts and obstacles. Of course, that feeling is also helped along by the fact that there are artificial trees all over the three courses.

When Petro got ownership of the warehouse in August of 2004, he wasted no time in getting to work. First, he worked on bringing the long-abandoned structure up to code, and then he began work on the construction of the stunts.

Because the building was in such terrible condition, there was an extremely large amount of work that needed to be done on it. It was a process that took us a total of six weeks to complete,” he said.

A small group of devoted volunteers were responsible for the construction of all of the stunts themselves. These individuals put in many hours planning, creating, and testing everything.

The riding area is subdivided into a number of different areas. In addition to beginner, sport, and expert courses, there is also a trials area, a “skatepark” for bikes, a foam pit, an outer riding loop that is a quarter mile long, and a complete jumping loop that loops around virtually the whole park.

The structure, which has now been enlarged to a total size of 80,000 square feet, is equipped with changing rooms, restrooms, a large indoor parking space where you can leave your vehicle while you take a break, vending machines, a lounge, and several more amenities.

Our most recent trip to the park was on 1 April, two weeks before Ray closes the park for the season.

The whole point of the park was to give people a place to ride when the weather is bad, so when things get nice Ray shuts down and goes to work rebuilding things. This summer he plans to relocate the foam pit, add more cross-country features and even add a bar/distillery for the adult customers to visit after the riding is done.

With massive amounts of press and some huge events that drew big-name riders, business at the park has doubled since its inaugural season.

That’s good news because the costs to maintain and heat the building are extremely high.

The entry fee this year was $18 for non-members on weekends or $10 for those who purchase a $90 membership. Anyone who has logged any serious mileage at the park knows it’s absolutely worth it.

What can you expect at Ray’s Indoor MTB park?

Even for those of you who have no fear of gravity, the beginner course is a great way to warm up. With a couple of small berms, a few skinnies, some rocks and a mild teeter-totter, it whets your appetite for what’s to come in the park. More experienced riders find this is a good area to ‘dial-in’ a bike before hitting the fun stuff.

The average rider will find the sport area the perfect place to ride a tonne of challenging wooden obstacles while getting a workout at the same time.

Despite the warehouse being flat, there are so many obstacles built into the courses that by the end of each run you’re definitely feeling it. The sport area starts out with a high-speed section of berms, whoops and table tops and then goes into the all-out technical section. Here you’ll be challenged by S-shaped bridges, rock gardens, teeter totters, lots of skinnies and more. If you can clear the first 90% of the sport course without putting a foot down you’re doing well, but if you can clear the entire course including the last skinny which is a hydro pole on it’s side, then you’re better than most.

Don’t let the “Expert” badge on this section of the park scare you off — there’s still something rideable by most.

Last year the expert section had some very sketchy stunts that were unrideable by all but the top riders, so this year Ray refined things a little bit to make it good for everyone. There is still a wide-variety of stunts that challenge even the best riders, but everything is just a bit safer this year. This section of the park is where the creative juices of the park’s builders have really come through.

There’s a three-level drop off where you can learn to ‘huck’ from various heights, there’s a double teeter totter, a ‘slider’, an elevator drop (exactly how it sounds…you ride in and it drops you down), a pivoting teeter that drops and rotates at the same time and lots of skinnies.

This is a two-lane mountain-cross-type course where smoothness and momentum are all you need. You can actually ride this entire circuit without pedaling because the berms and bumps give you all the speed you need. Many a race have been had on this very fun section of the park. It was new for the 2005-2006 season, but has quickly become one of the park’s highlights.

For anyone who likes to get some air under their wheels, this is the perfect place to start. The high-speed jump loop snakes its way around the other sections of the park and, if you can make it through the whole run without tiring out, here’s what you will hit:

A long straight away to a left handed-berm that gives you enough speed to hit the park’s biggest box jump. From here it’s a short straightaway into a fairly low box jump and then you hit a massive hip jump with two different height options.

The hip kicks you to the left and leads to a three-pack of steep box jumps where the best riders can easily pull backflips, 360s or whatever else they’re confident enough to try.

From here it’s another small hip jump, over a right-handed berm and then into the 5-pack, which is a series of three jumps, a 12-foot high massive 180-degree berm and then two more box jumps to finish off the run.

Trust me, by the end of all this (if you made it through without wiping out, you’re wiped).

Tucked away in the back corner is an unbelievable park designed by resident pro rider Joe Prisel. The park features a 180 degree wall ride, loads of quarter-pipes, splines and more. BMX riders are only allowed into Ray’s on certain days, but when they are allowed, this is where they love to hang out. The nice thing is it’s designed with bikes, rather than skateboards, in mind.

I know what you’re think. Me? I would never, ever try a foam pit. Well again, trust me, this is not nearly as scary as it looks. The foam pit at Rays is massive, and it allows you to try anything you’ve ever dreamed of on a bike. I’ve watched guys attempt DOUBLE backflips into this pit and walk away laughing. Unless you’re really, really bad on a bike you can’t get hurt in a foam pit. Try it once and you’ll be hooked.

Ray’s Indoor Mountain Bike Park may be the first of its kind in the world, but it likely won’t be the last. As more and more riders from all corners of the earth visit the park, the concept of riding indoors in a place like this is beginning to spread.

What makes Ray’s special though, is that everything aligned perfectly for the park to open. If you tried to open something like this in Vancouver or Toronto, you’d have to pay so much for 80,000 square feet of warehouse space that you would go broke before the park ever saw its first rider. Ray found the ideal warehouse in a city that has a strong riding community and a bad winter.

And Cleveland also happens to be driving distance from many major urban centres that have horrible winters.